skip to main | skip to sidebar

Soooooo... last time I update this blog from Corvo (if my flight leaves as it's supposed to tomorrow). Feels strange and a bit sad, but I won't stand much longer here now so best to leave before I go (totally) insane!

Still somewhat windy today but no rain in the morning so Manuel took me up to the Caldeira. Did the walk down there but didn't find anything new. Nice walk though since I didn't get one single rain shower!

Walked back towards the village and decided to have a look around the reservoir as well. Walked up there and had lunch together with the two Red-throated Pipits. 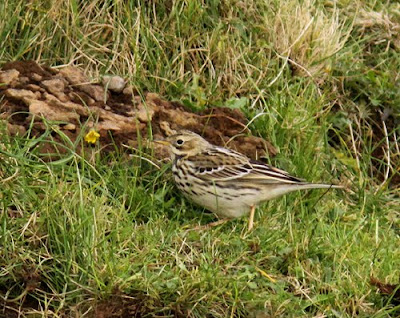 As I walked around the reservoir itself I saw a Blackbird with a very long tail, but the bird jumped out of sight - Ring Ouzel? Went after it but got distracted as I stumbled over this beauty instead. 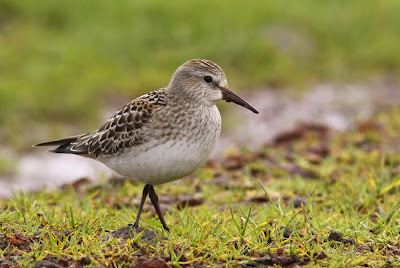 Anyway, as my photo session with the rump was over I went to the thrush and pinned it down as a Ring Ouzel. Still there after two weeks! Another guy that was still there was the Pale-bellied Brent. 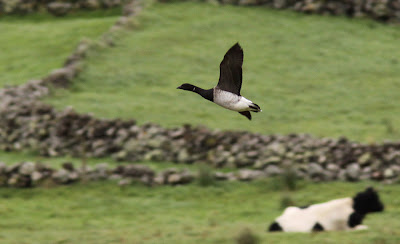 Had the Buff-bellied Pipit briefly a few times as well and a lonely Snow Bunting. On the way down I decided to have a look in Ribeira da Lapa. As I walked there I passed my secret snipe marsh and despite scanning the area first I flushed a snipe as I went closer - Common Snipe. Continued walking and flushed another snipe, a dark one! The same snipe as I called Wilson's Snipe the first time I saw it and "dark snipe" the second time I saw it. This time it looked like a Wilson's Snipe again and as I saw where it landed I went after it. Couldn't find it on the ground so had to flush it again, but didn't get any good views this time either. Was fortunate enough to see wereit landed again so went after it a second time. Of course I couldn't find it on the ground that time either so by mistake I flushed the bird. This time I was a bit luckier since the bird flew around me a few times before it settled again. Managed to get some pretty good record shots that I think pins the ID as a Wilson's: 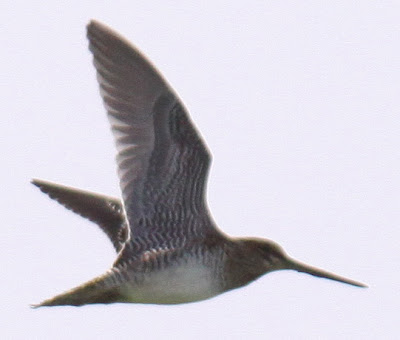 Note the heavily and evenly barred flanks, axillaries and under wing coverts. 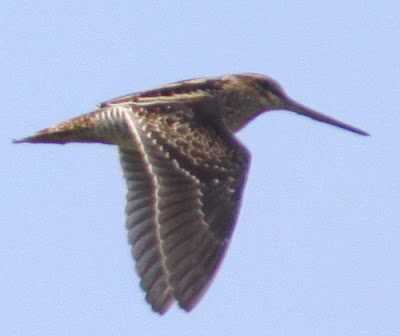 Note the very thin white edge on the back of the arm. 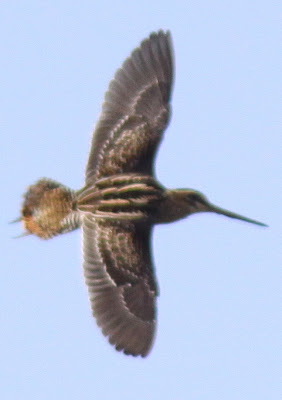 Note the back of the arm again, the Jack Snipe-ish look of the back and most important, the barred outermost tail feathers.

As I was chasing the Wilson's Snipe I flushed the Blue-winged Teal that went back to its favourite pool as usual. Birded my way through da Lapa in the heat from the sun(!!!) but didn't find anything except the B-w Teal again. 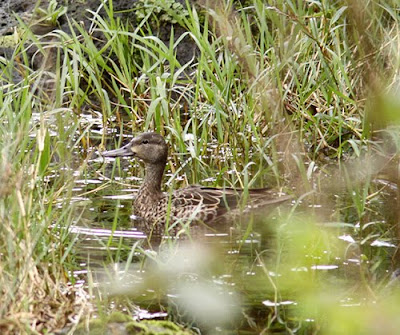 Blue-winged Teal
Walked back to the village and checked the rubbish dump, beach and airfiels before ending the day with some seawatching. The Ring-billed Gull was still on the airstrip and the sea was still pretty empty.
End of the day and over to a quick analysis. What conclusions can I make after spending to months here?
1) Go here! This is the place to look for American land bird vagrants in the WP!
2) DON'T go here for two months, it's too long!
3) Don't just follow the stream of birders and go here around the standard date 20th of October. Spread out over the season instead! Passerines turned up from late September (Yankstart and BO BO Link) to early November (Sick dick-all and Dark-eyed Junkie on Flores) this year.
4) Hmmm... Aaaaah, I'm getting too tired for this! If you have any additional thoughts, just visit Darryl's "Azores FAQs" on gwentbirding.blogspot.com.
Tomorrow I'm flying to Sao Miguel (I hope) to spend two days there looking for Pied-billed Grebe, the Double-crested Cormorant at Mosteiros and hopefully do some other birding as well. On Wednesday I fly to Terceira for two days birding before I go back to Lisbon-Copenhagen-Malmö on Friday. Will make a last update of the blog when I'm back in Sweden on the 21st!
Birds
Grey Heron 2, Mallard 15, Pintail 1, Common Teal 15, Tufted Duck 1, Ring-necked Duck 2, Pale-bellied Brent 1, Common Snipe 15, Wilson's Snipe 1, White-rumped Sandpiper 1, Great Black-backed Gull 4, Lesser Black-backed Gull 6, Black-headed Gull 2, Ring-billed Gull 1, Red-throated Pipit 2, Buff-bellied Pipit 1, Ring Ouzel 1, Snow Bunting 1
Upplagd av Olof Jönsson kl. 21:34

Olof Jönsson
Corvo, Azores, Portugal
Between 14th September and 16th November I'm birding the island of Corvo (Azores). Here you can read daily updates about the happenings out here during my stay. Enjoy!

Watch AZORES THE MOVIE 2009 by Simon